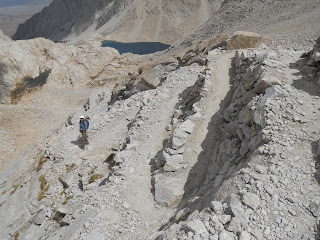 70 percent of all Mt Whitney summit attempts end in failure.

There, I mentioned the elephant in the room.  The most current statistics available for Mt Everest (2012) show a failure rate of 56 percent.

Why the discrepancy?  Most people throwing down 60 grand for an Everest trip complete the necessary steps to prepare themselves for climbing it.  Once at the 17,000-foot base camp, climbers acclimate gradually to ever-increasing altitudes for at least a month before making a serious bid for the top.  Most of them are clients of commercial concerns unwilling to assume the risk for any client deemed unprepared by the guides and Sherpas.  So that 56 percent failure rate reflects a preliminary weeding-out process done by the more reputable commercial outfits.  There is no such process for climbing Mt Whitney.  The mountain is open to anyone with 15 bucks and an additional six-dollar application fee.

The number one reason for failing to summit Mt Whitney remains the complete lack of preparation for the rigors and hazards of the climb.  Most people underestimate altitude effects and overestimate their level of conditioning.  Some feel their incredible mental toughness or their heroic ignorance of any potential pitfalls will win the day.  Unfortunately, these dubious strategies put not only the strategists at risk, but also anyone obligated to rescue them.  That could mean a Medevac with all the trimmings or fellow climbers already pushing themselves to their limits.
Of course it's hard to arrange a rescue if nobody knows you need one.  Believe me when I tell you your phone has about as much chance of working on Mt Whitney as a pizza delivery to the summit.  That means someone must go all the way down to the Whitney Portal Store and pray that Doug, Doug Jr, or Earlene Thompson is still there to call down to Lone Pine.  Otherwise, add that Lone Pine trip on to the time necessary to mount a rescue.

Preparation for Mt Whitney takes time.  To do it safely and successfully means we can't just wedge Mt Whitney into our busy schedules.  We must schedule ourselves around Mt Whitney.  Success or failure to summit Mt Whitney depends largely on our ability to prepare ourselves physically, mentally and materially for the task at hand.  It's a total garbage-in-garbage-out proposition.

There are some factors which can't be overcome by preparation.  One is always at the mercy of the weather.  Lightning is an extremely dangerous high attitude hazard.  Remember, Mt Whitney is the highest point for 1,630 miles.  Rockfall occurs often along the trail as well as other hazards.  However, tripping and falling because your legs are baked can be prevented by conditioning and acclimating properly.


So what constitutes proper preparation?  Much of this blog's content will be dedicated to that very subject.  I'll provide workable plans and acclimatizing strategies for CA residents, other western state-ers and those who live in areas lacking good training altitude.  Regardless of where we reside, our preparation requires perseverance and perspiration.  Lots and lots of perspiration.

OK guys, let's keep 'er civil and mannerly. This is not a political site so diatribes of that ilk are not welcome and won't be published.