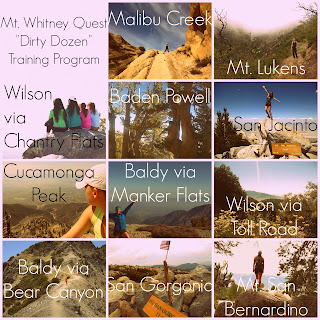 There are two basic training modes; aerobic and anaerobic.  The former literally means "with air" while the latter is the opposite.  Training aerobically means the body's demand for oxygen does not outstrip its ability to supply it.  Aerobic training runs are longer and less intense.

Anaerobic training refers to a specific ability to do work in the absence of oxygen, commonly referred to as "oxygen debt."  Anaerobic training runs are shorter and far more intense.  Interval training on the track and repeats on hills are two examples.

For our high-altitude purposes, we're relying on the running to improve our oxygen-carrying capacity.  Running at certain intensities improves the whole system by strengthening the heart muscle and creating a larger network of capillaries probing deeper into muscle tissue.  We achieve this goal more efficiently by using the heart rate monitor and capping our maximum heart rate while remaining "in the zone" for longer periods.

Depending on our age and physiology, each of us has a maximum aerobic potential.  Generally, aerobic max lies around 75-80 percent of our maximum heart rate (you can find your rough maximum heart rate for training by subtracting your age from 220).  If you are overweight or sedentary or both, your aerobic max may be lower, at least for now.

A warning before we go further:  Consult your physician before embarking on any training regimen.  Also, trainees may require less intensive training to work up to their maximum aerobic potential.  Being more ambitious than your body's ability to adapt is a well-worn pathway to injury so ease into it. 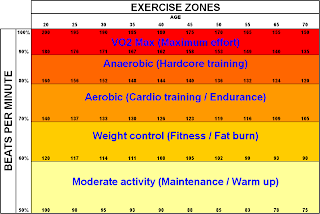 For most of the population, the heart rate for maximum aerobic potential lies somewhere between 130-160 beats per minute.  Use the chart above as a guideline, at least to start. Training near maximum aerobic potential creates the maximum amount of blood volume and pressure, thereby forcing capillaries deeper and deeper into muscles.  The more we develop our capillary network, the easier it is to provide working muscles with oxygen and glycogen.  Having an underdeveloped circulatory system starves muscles for oxygen and glycogen just as sure as trying to eat by sucking a turkey through a straw.

Running at sustained levels above maximum aerobic potential creates two major problems.  First, the heart beats so rapidly, the valves slam shut before the chambers are full so the overall volume and pressure go down.  Second, lactic acid forms in the muscles in the absence of adequate oxygen supply.  Slowing down allows us so achieve our stated aims; improving cardiovascular efficiency and maximizing training time. 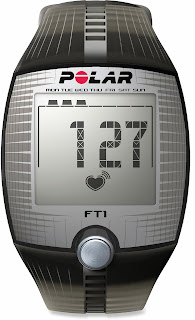 We use the heart rate monitor to ride herd on ourselves. For our purposes, even the simplest monitor will do.  I use a Polar FT1 retailing for $59.95.  The display shows heart rate while in training mode.  I can set maximum and minimum heart rate alarms.  Set them at least five beats above your aerobic max, otherwise you'll go crazy with the alarm beeping.  Afterwards, I can see my exercise time plus max and average heart rates.  That's it.  So don't break the bank needlessly.

Also, my heart rate monitor uses a chest strap transmitter.  In my opinion, non-chest-strap monitors are a waste of money.  Some require stopping for 20 seconds while placing a finger on a pad.  Save your money and take your pulse instead.  Others don't get the finger but they are still inaccurate.  A monitor with a chest strap is plus-or-minus one beat-per-minute accuracy no matter the price or manufacturer.  You'll get over the strap in about 30 seconds.


Above 10,000 feet, my "aerobic threshold" drops about ten or 15 beats.  That's why I advocate using the monitor while climbing as well.  If I exceed my adjusted threshold, I get about 20 minutes before my legs are smoked.  No amount of rest stops will revive them for long.  Five or ten beats below my aerobic threshold and I can climb until next Tuesday.  Having said that, sometimes I induce oxygen debt on purpose during training climbs for short stretches to increase my anaerobic capacity.  More on that in the future.

We are all "prisoners" of modern life.  We are all busy and oversubscribed.  Get the most from your valuable training time.  There is no excuse for neglecting your training.  Others are counting on you.  Give yourself the best possible chance to summit.  Start now and adapt.  Climb.  Run.  Monitor.  Succeed.  Enjoy.

Part I presents my argument for running as one part of a three-pronged training program.  The other two elements are climbing and altitude acclimatization. Part II explains to habitual runners the necessity for climbing as high as possible as often as possible.

First of all, I've been running since The Beatles were still a band.  As I've outlined in many previous posts, I've both competed and coached.  I know firsthand the runner's mindset.

"I run, therefore I am invincible"


For instance, most runners believe running inoculates them from pretty much every malady short of AIDS.  They eat what they want and as much as they want.  They do get fewer illnesses and use less sick time.  For a large percentage of runners, this belief is justified.

Unfortunately, this belief crashes to the ground when climbing high.  First, altitude can affect a person psychologically and physiologically regardless of one's physical condition.  Second, distance running is nowhere near as muscular as climbing.  A good, stiff running hill climbs at maybe 300 feet per mile (57 meters per kilometer).  There are climbs on my Mt Whitney Dirty Dozen list with sections in excess of 1,250 feet per mile (237 m/k).  Mt Whitney itself averages 569 feet per mile (108 m/k).  So we're no longer gliding effortlessly over the ground using as little muscle as possible.  We're using our quads, hammies, glutes and core muscles to a much greater degree.  Plus, we're wearing a pack.

So we have to practice at high altitudes to ready ourselves for even higher altitudes.  Climbing is more like circuit training with a gazillion reps than like running.  Our legs and core lift our body-and-pack-weight over and over again.


I heard one three-time marathoner brag about how she went up and down Whitney in "less than 24 hours"  having spent little or no time at altitude prior to the climb.  That's way too long.  I can't even sleep that long.  My wife Robin, whose lifetime longest run is 8 miles (12.9 k), who ran no longer than 6 miles (9.9 k) while training for Whitney, went up and down in 15 1/2 hours.  She did it in far less time because she spent a lot of training time climbing high.  After we were done, Robin told me next time she would spend even more time preparing up high.  Meanwhile, Marathon Woman may never do another 14-er again.

No matter our sporting background (or lack thereof), we all need the same basic preparation.  We must increase our cardiovascular efficiency, climb with a pack for muscle building, and climb high to acclimate.


Having said that, we know running will improve our climbing.  However, my own "experiments" show climbing also improves the running!  When I reach the 5-digit altitudes with the Mt Whitney Dirty Dozen, my average running pace drops a minute per mile. Hills melt away under my feet.  Instead of plodding up three-mile inclines on distance runs, I start looking for ways to shave more time.

All that time climbing steeply up in the thin air improves everything.  Your running in a rut?  Bust out by busting up.  When life gets you down, climb up.  Altitude affects attitude too.

"We Interrupt This Program...."

Unfortunately, Google has disappeared my really cool (at least I thought) blog background photo so we're all swimming in the middle if this green pool for the moment.  Both Google and I are working on it plus I'll have two more posts for you in short order. Update:  The background photo doesn't show up with my Foxfire browser.  Seems to be fine in Internet Exploder.
Update update:  It works for Chrome users as well.  Perhaps it's just me.....
Scribbler: Jerry DeCapua at 11:31 AM No comments: