Running and Climbing: A Proven Recipe for Mt Whitney Success - Part I - Why Run?

In previous posts I alluded to the importance of running for a successful Mt Whitney trip.  Yes, I can hear the knives sharpening from here.  My background as a track & field athlete and coach led me to design a program for my first Whitney climb.  I followed it for each subsequent attempt and summited last year in 7 1/2 hours despite a sinus infection, fever, and being 56 years old.  My conditioning carried me through and allowed me to enjoy myself thoroughly despite my maladies slowing me down.

Many people have found success since I came up with the running program, the Mt Whitney Dirty Dozen, and the somewhat novel concept of actually respecting what one is doing enough to prepare properly. 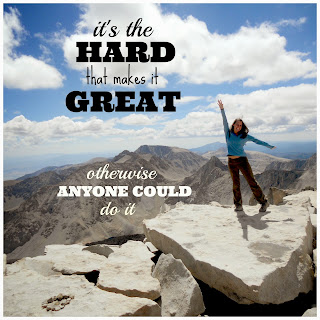 Climbing long and hard builds muscle for propulsion, gravity resistance, and joint protection.  High altitude climbing prepares one for the physical and mental effects of reduced air pressure.  Running perfects the fuel pump keeping the whole system operating at top efficiency.  Skimping on any one lowers the effectiveness of the other two and edges the failure-to-summit rate back toward 70 percent.


The case for running.


Cardiovascular training on a daily basis forces small capillaries deeper into muscles, bringing glucose and oxygen along and enabling  them to operate for longer periods of time.  Cardiovascular training also facilitates acclimatization to high altitudes.  If one develops the cardiovascular "infrastructure" to  supply greater oxygen levels to muscles, then it stands to reason one benefits greatly when oxygen is in short supply due to altitude.

Okay, get those knives ready for this next statement:  Running as a cardiovascular exercise can create stronger joints, ligaments, and tendons as well, provided the trainee implements increases slowly enough.  Just as weight bearing exercise (like, say, hiking up a mountain and back down again with a pack) allows a post-menopausal woman to retain bone mass, the body will adapt itself to the extra stress.  We're not like machines wearing out; we regenerate.  Unless you're in a big hurry to improve and blow stuff up.


Hey, I'm not immune.  I'm currently "on the shelf" with severe plantar fascitis due to too many miles in worn shoes. Injury due to poor/worn/incorrect equipment is number 2 on the Hurt Parade just behind too much too soon.  Yes, running shoes can be expensive, especially since I advocate buying them from a store with personnel trained to fit them properly.  Injury can be even more expensive. 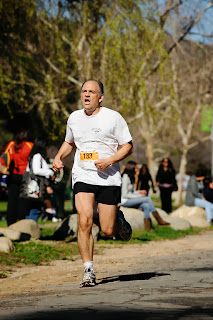 What about biking or swimming?  Certainly they don't "pressure" connective tissue.  That's the problem.  A cyclist friend of mine took a rugged 20-mile hike recently.  Afterwards, his knees and ankles were killing him.  While he was in good cardiovascular shape, his knees and ankles could not cope with the demands placed on them by boots-on-the-ground exercise.  I'll advocate cycling as prep for Mt Whitney when they build a bike trail up there, which will be never.

Every year, people tell me they can't run due to knee/ankle/shin/eyeball/earlobe issues.  Most people's initial contact with running is school sports with rules-restricted seasons where coaches cram the available practice days with as much conditioning activity as possible.  Or, people attempt to train themselves without knowing whether their methodologies have any basis in fact. Your body adapts as fast as your body adapts and not a day sooner.  Take it easy and start early.  Your running program commences at least 6 months before your Whitney date.


Based on my experience, climbing Mt Whitney requires sufficient cardiovascular endurance necessary to run 5 miles (8 km) in one hour at least 5 days a week.  That's 12 minutes a mile (7:28 per km), a standard attainable by about 80 percent of the population.  Only the extremely old, extremely young, or the serially sedentary will find this standard impossible.  Persons over 65 should add a minute a mile due to loss of speed. Running at that level for the month before Whitney should do the job.  For many, achieving that level requires starting even more than 6 months prior.

So put the knives away.  Instead of creating excuses, implement a running plan that works for you.  Adapt gradually to stress.  Harden your body for the rigors ahead. Don't tear it down.  Maintaining a running program is easier when we have to be at our best on a given day rather than training for the nebulous ideal of looking better.  Get together and train with your trip partners at least once a week.  Remember, don't fit Mt Whitney into your busy schedule.  Fit your busy schedule into Mt Whitney.

My Wife Robin is a "Meme Machime" 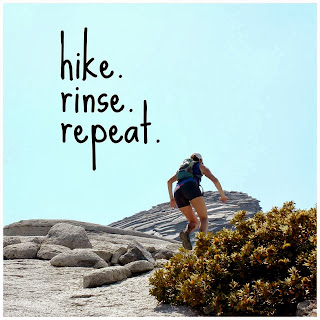 My wife Robin can churn these out like butta.  Sometimes I come up with the wording and she helps me with the formatting and the visual aspect.  However, this one is all hers.

In the meantime, I have a bunch of new posts lined up and ready to take off.  You'll be seeing them shortly.  Thanks for tuning in!